Our editors pick the products & services we write about. When you buy through our links, we may get a commission. Learn more.

As an example, When I shoot my Smith and Wesson M&P T it is suppressed, mounts an ACOG sight with graduations match to the.223 Remington for 400 yards, and is basically set up for open country Dakota style hunting. Now, turn things around just a bit and head for a deep cover Louisiana swamp, or Minnesota brush country in the central part of the state. Here the ACOG will still apply because it can be used both eyes open and being also illuminated, sight through some nasty brush or grass at times. Therefore, selecting the ACOG as a go to system on the AR-15 could be just the ticket you’re looking for your best scopes for the ar-15

If however the scope sight you have selected is a large scope, high powered, and a bit out of balance at times, it is advised to stay away from short range brush country field applications and address this glass sight to the open country end of the program.

What I intend to do regarding this subject is to illustrate a good AR scope, but position it in the correct environment based on the design of the glass sight.

Something like an ACOG but much less money this little sight is a nice match as to balance when mounted on the AR-15 receiver. The illuminated scope comes in three colors red, green, and blue, and retains a fiber optic secondary sight as well.

Magnification to 4X the dot sight is workable for closer range shooting, and it retains an objective lens of 32mm. This means again workable in terms of light gathering abilities. Based on price this glass sight is a workable grade e for the general use shooter. I would not consider it for professional applications based again on the obvious materials cost.

However, that stated many shooters just want a Sunday afternoon plinker, or behind the door rife in the home, and as such this meets those general purpose needs.

The scope is mounted on a Weaver quick lock base system making the setup very workable when mounted on most AR-15 receivers being they carry just this style of rail.

The lens is glass etched which is a real plus at this price, and the dots retain the change ability in terms of brightness levels.

Scope housing is made from Aluminum, overall design would seem to be very workable as a flexible general purpose sight.

Currently I am shooting the Trijicon military grade ACOG on my AR-15 as was illustrated during the introduction of this material. This model by Trijicon is a bit advanced for general purpose work and to be sure top of the line in materials quality, engineering, and above all directly related to the path finder in ACOG technology.

This is a 3.5×35 illuminated scope, requires no battery’s and it generates its own power from an internal source. The scope retains this energy for night shooting as well.

The scope uses the horse shoe style sub tensions versus the military chevron, and also retains the secondary head up ( HUD ) 9.0MOA RMR sight, The whole system is tacked together for the rifle mounts by way of LaRue tactical mount. Ideal for close in tactical applications, heavy cover hunting as in shooting hogs, and can also stretch the shot for medium range applications as well. Flexible, well built, and trouble free for many years of service.

Here is the third in the general series of dot sights in the ACOG style. Sized right for the Ar-15 receiver, uses the Weaver style mount, and requires no battery’s as the system is self generating. This is a sight that is priced in the general use category, versus professional use range. The scope carry’s the military style chevron style reticle, is built from high grade aluminum in terms of the units main housing, uses real fiber optical designed systems, however the unit is not designed to be used in the dark. No night function. ( Tritium install )

With a move into the scopes that are a design generated by the AR-15 I am starting with the reasonably priced Monstrum G2. This sight is built on the chopped bell design and uses the 24mm primary tube size. The scope at 1-4 power is workable for average range shots, and these scopes are so effective as applied to the carbine length AR-15 that the military has now gone to this same design regarding a future replacement for the ACOG type sighting systems.

Aircraft grade aluminum makes up the main tube body, and turrets are open style for fast elevation or windage adjustment. Scope rings and sun shade are included with the scope package. This is a good value for general use as a hunter, or recreational shooter.

The scope functions of a CR2032 battery.

This is a professional grade scope as applied to the AR-15 rifle. This scope is the same unit being supplied to the US Army currently and studies have illustrated that using this glass sight brings up body counts in combat as the shooter becomes somewhat of a self styled sharp shooter. Where as units have always had a handful of designated sharpshooters, or snipers. this makes every solder in the unit a possible longer range dead accurate shooter.

This glass sight in its short form retains an illuminated reticle, a 0.2 MRAD ( military, ) elevation and windage adjustment click systems, and retains better quality glass for positive target presentation. This scope is mission directed as a 600 yard gunning system.

The scope uses a return lock down zero system, Lumatic advanced display that retains sighting image even in very bring light, and the “Lightwave” power scanning ability made for up to one mile dead hold target observation with a clear sight picture.

While you may not want to shoot a mile you may need to know what is going on way down range. Design elements associated with this scope are notorious 21st century if you will. This is the go to scope for police sharpshooters in tight urban combat situations, and operator related needs in the open field as well.

Here we have a lighted reticle go day or night use, open turrets for tactical style ranging and sight adjustment in MOA clicks, a 30mm main heavy duty tube for rough field use, a one piece Weaver style mount that is quick and solid. Then also set up as designed with the chopped bell making it a good fit for the AR-15 platform.

Here is still another rifle scope that is a good fit for the AR-15 as offered by Sig Arms. This cope retains the 2.5-8x power range, a 42mm objective lens, and an over all size that fits the AR platform very well.

This scope is much like some of the systems I have used on AR’s and AK-47’s as well. These are not massive scopes, and as such balance well and still give the shooter all the range options in the field that could be required.

One inch main tube, coated optics and some of the advanced system that Sig is becoming known for within the industry.

A move into the world of Leupold scopes up with a final short tube scope that is again well balanced as applied to the AR-15 receiver. This scope with the 1.5-4X20mm is very workable to normal game hunting ranges, and also meets the needs of defense or combat operator status.

Built with 6061-T6 high grade aluminum the scope is designed for a lifetime of performance. In so far as I have had Leupold glass on some of my rifles for as many as 50 years to date, I believe every word the company is stating about their product.

The scope uses ¼ MOA turret adjustments under a capped system, and all lens surfaces are protected with coatings to fight off dust and crud that is common in the field.

The lens has the Leupold Twilight Light Management System. This gives the shooter extra gunning time both in the early morning and late evening by the use of advanced light control glass.

The scope is all American built in terms of both parts and assembly.

I know I have indicated the best scopes for the AR-15 are those with some small size designs being the receiver of the AR-15 is short with an over all rifle length that is in most cases short as well. However, there are times when this rule can go straight out the window.

Leupold offers a wide range out outstanding hunting scopes. Now, take on bore or hogs in tight cover and you want a big working sight window, low power settings, and the ability to move fast with the firearm. This scope in the VX-5HD is a good example of a speciality scope for specialized work.

This 3-15 power scope covers all the bases. Want to see at long range? Move up to 15 power, and when in the swamp or brush turn down the settings to the 3 power setting.

The scope retains the illuminated FireDot 4 CDS reticle system,making it a night fighter and great day operations scope. Lighted crosshairs is set to an automatic on off system, and when the scope is not moving the illuminated reticle turns off all on its own. This obviously saves battery life. The scope turret settings retain the parallax control on the left side, and the turrets are also tactical designed with open elevation and windage controls.

In the past several years I have been on three industry events during the testing of scopes and firearms. On those test hunts we were shooting open county and the targets were prairie dog, badger, coyotes, and rock chucks. Our rifles were by example the new at the time Mossberg  T tactical AR15’s, On those rifles we had Swarovski sniper designed optics. The scopes were so large they almost hung out over the muzzles of the carbine style AR’s.

While they look a bit awkward, the scopes allowed us to shoot very accurately by way of 55 grain V-Max Hornady ammunition to 500 through 700 yards on grass rats, and 300 yards on coyotes, The rock chucks were in real trouble at 600 yards as well. This rifle was being pushed to the maximum and the glass sight did the work. That is why I have selected this last sight in a heavy hitting long range, and also sort range operational sighting system. 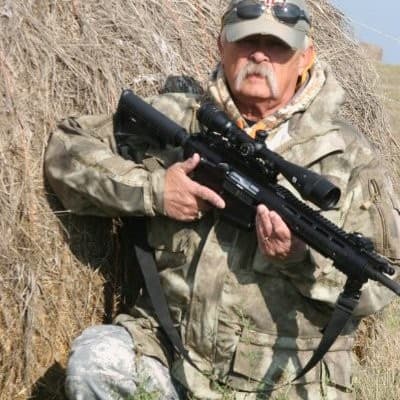 L.P Brezny has been writing and reviewing product as well as how to projects for the past 50 years. He has authored four books on shooting with three on long range, and one covering shotgunning. With 26 years on a metro police department as a street officer and the rank of SGT / training L.P. has covered all the bases regarding weapons and street survival.

During the early years in non-toxic shotshell ammunition development L.P. designed the first successful measurement system for recording the speed of shot shell payloads down range. He was responsible for getting actual shotshell velocities printed on factory load boxes. Over the years he has developed and markets MetroGun System TM, and sells his designed ammunition for subsonic sound suppressed shotgun shooting.

Current L.P. resides in the South Dakota Black Hills and spends a good deal of time working through many types of ammunition both in the field on warm targets. With ultra long range being a current specialty L.P. shots for test and accuracy at ranges as great as one or more miles on the wide open Dakota grasslands.